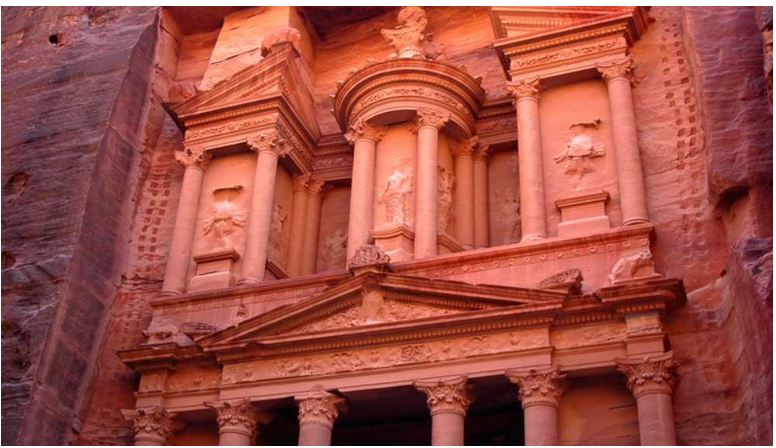 Many visitors to Israel choose to include a visit to Petra in Jordan, one of the new Seven Wonders of the World, which is located just 135 kilometers from Eilat.

The ‘Red City’ of Petra was carved from the rocks by the Edomites in around 1,000 BC, and it later became the capital of the Nabatean empire. Hidden from sight for hundreds of years, it was rediscovered around 200 years ago and it is recognized today as one of the new Seven Wonders of the World.

Visiting Petra from Israel could not be simpler. We recommend crossing from Israel into Jordan at the Arava Border Crossing near Eilat, which is quick and easy. The drive to Petra takes around two hours and the stunning desert scenery of southern Jordan and Wadi Rum makes it truly memorable, culminating in the approach to the hidden city through the breath-taking Siq Gorge.

Our expert guides will take you on a guided tour of the Petra Archaeology Park, including the Bab Al Siq Monuments, the Obelisk Tomb, the Treasury of Khazneh, the Jabal Madbach Palace, the Roman theatre and the renovated Dam. You will see buildings carved out of the rock face, together with monuments and tombs that demonstrate the remarkable engineering expertise of the ancient civilizations that built here, and that have survived thousands of years almost intact.

It is the reflection of sunrise and sunset on the pinkish red sandstone that led to Petra being described as the Rose-Red City by Victorian travellers.  Other sites in the area include the tomb of Aaron, brother of Moses, Mount Nebo where some believe that Moses was buried, and Wadi Rum. You can also combine your visit to Petra with an overnight stay, either in Wadi Rum or at one of the many hotels in the bustling Jordanian port city of Aqaba on the Red Sea. There is also an option to sleep in a Bedouin Camp and enjoy the delicious food and authentic hospitality of these traditional desert dwellers.

Depending on your timetable and your budget, Shatour would be happy to organize every aspect of your visit to Petra from Israel. Talk to us today about including it in your itinerary.