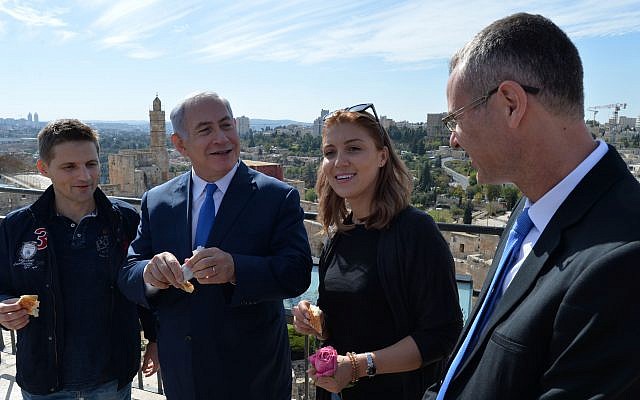 Israel’s 3 millionth tourist was given a red carpet welcome and a private tour of Jerusalem by Prime Minister Benjamin Netanyahu in November 2017.

A couple from Bucharest, Romania – Ioana Isac and Mihai Georgescu – were presented with a certificate marking them as Israel’s 3 millionth tourists during 2017. They were escorted to the Tower of David Museum in the Old City of Jerusalem by Tourism Minister Yariv Levin and treated to a private tour by Prime Minister Binyamin Netanyahu. They also enjoyed an upgraded hotel suite, a visit to the Dead Sea, a helicopter flight, and a dinner with Israeli chef Nir Tzuk. The couple said that they chose to holiday in Israel because they wanted somewhere “warm and sunny” to celebrate Mihai’s birthday.

This publicity stunt was designed to celebrate the breaking of the 3-million-tourist barrier which sets a new all-time record for incoming tourism. Already in July the Central Bureau of Statistics reported a record numbers of visitors to Israel during the first half of 2017, with a 20% increase from the US compared to 2016, a 76% increase in visitors from China, and a 30% increase from Russia.

The marketing strategy of the Israeli Tourism Ministry in recent years has been to brand Israel as an all-round destination for everyone, without focusing on its history or religious heritage. They have reached out to target populations who have no obvious associations with Israel, and who are less interested in the political situation, such as China, Russia and many African countries.

At the same time, the Open Skies agreement with the European Union, introduced in 2012, has seen the opening of new air routes into Israel and more budget airlines servicing European city airports. In the past five years, air fares to and from Western Europe have fallen 15%, making Israel a more affordable travel destination.

Wherever you come from, and whatever your motivation in choosing Israel as a travel destination, every visitor who travels with Shatour Israel is treated to a red-carpet welcome and a customized tour of the country! Book with us today and you may become Israel’s 4 millionth visitor!