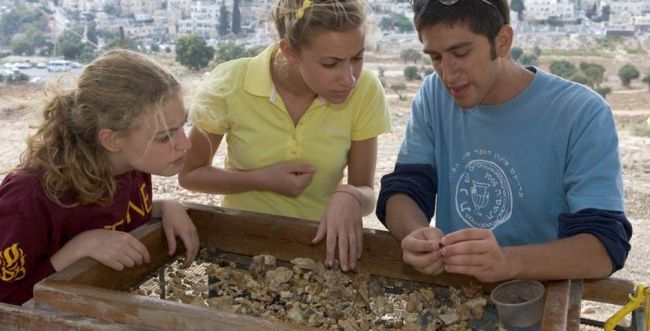 Become archaeologists for a day and hold ancient history in your hands! Come and join the Sifting Project Archaeological Experience near the Old City of Jerusalem and see what you can discover.

No other city in the world has as much history buried beneath its surface as Jerusalem. Layer upon layer of ancient artefacts are just waiting to be discovered, and the Sifting Project brings it all to the surface.

The Sifting Project is currently working through dirt that was retrieved from an area adjacent to the Temple Mount that dates back to the Second Temple period. You can help to explore this fascinating period dated from 530 BCE to 70 CE, and sift through objects left behind by the Pharisees, Sadducees, Essenes, and Early Christians.

The Temple Mount Sifting Project began in 2004 when debris was removed from underneath the Temple Mount in Jerusalem without proper archaeological care. The archeologists who set out to recover and study the archaeological artifacts that were contained within hundreds of truck-loads of dirt, realized that the scale of the project made it too large to undertake by themselves. They enlisted the help of volunteers and set up the Sifting Project as an opportunity for people of all ages to learn about and engage with Jerusalem’s fascinating history by sifting through the debris with large sifters.

Now known as the Archaeological Experience in the Emek Tzurim National Park, it is a highly professional and well-organized educational activity, with guides in different languages and genuine opportunities to discover buried treasure.

We love the Archaeological Experience in the Emek Tzurim National Park because it’s a chance to dig into history and fun for all the family. Unlike other archeological digs, you are not required to get down on your hands and knees to dig – everything is provided at table-height for your comfort and convenience. It is also indoors, shaded from the hot sun, and there are displays showing the artifacts that have been found so you know what to look out for when sifting.

We have witnessed the finding of exciting treasures in the dirt that we have sifted there together. Over the years, the Sifting Project has discovered royal seals, Egyptian amulets, Babylonian arrowheads, jewels, mosaic stones, and coins from many different ages and countries.

If you would like to include a few hours of archeological discovery in your next visit to Israel, talk to Shatour about arranging a visit to the Emek Tzurim Archeological Experience.