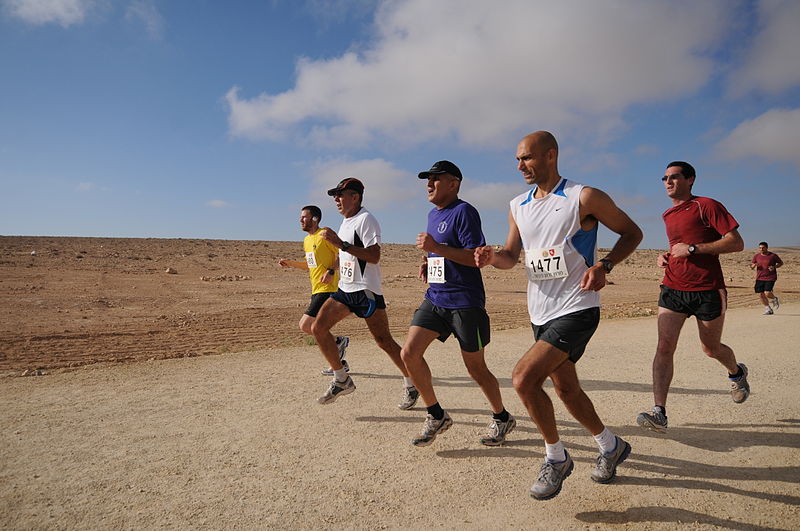 Israelis love to keep fit, and running has always been popular here, along with cycling, skating, scootering and many other forms of exercise. You can run for fun or join one of the many marathons around Israel – it’s a great way to see the country!

Tel Aviv is probably Israel’s favorite city for running, since it has miles of seaside boardwalk with lanes set aside for scenic running. Tel Aviv’s Mediterranean promenade runs along almost the entire length of the city, from the Port in the north to Jaffa in the south, and it a great route for professional and amateur runners because it is mostly flat. From Jaffa, Tel Aviv’s historic port city, the recently revamped boardwalk and winding promenade takes you south from Manta Ray Beach through the port and into a scenic park as far as the Peres Peace Center.

It’s fun to explore the city of Tel Aviv, because the European boulevards lined with trees have cycling or jogging lanes that are distinct from the roads and sidewalks. You can run downhill toward the sea or uphill away to the east if you prefer a more challenging run. There are also running routes through picturesque Neve Tzedek and the Carmel Market, best enjoyed once the stores and stalls have closed and the shoppers have disappeared into the bars and restaurants.

Jerusalem is a great city for running if you enjoy steep hills! Choose between the Old City and the new, where you can jog along the light rail train lines (taking care to avoid trains and bicycles!) or through lush green parks, with stunning scenic views of the City of Gold. You will meet many runners criss-crossing Sacher Park, and there are popular running trails and roads through the Jerusalem Forest, to the west of the city. There are new running and cycling tracks around the city that keep well clear of the traffic, and a complete city circuit measures 35 kilometers.

Israel has a busy running race calendar, including 42.2 kilometer marathons, half marathons, and 10k and 5k fun runs during the pleasant winter months. The November Tel Aviv Night Run is all about the atmosphere, with many of the 25,000 runners enjoying the 10K run in costume. A more challenging race in November is the Eilat Desert Marathon, known as the most beautiful and wildest route in Israel, from the shores of the Red Sea through the red mountains with breathtaking desert views.

The Tiberias Marathon in January is Israel’s longest-running road race and the lowest in the world, at 200 meters below sea level. Its route skirts the southern shore of the Sea of Galilee and is mostly flat. The Tel Aviv Marathon in February is a flat race packed with 40,000 runners enjoying the spring climate and scenic route, which includes the seafront promenade. By contrast, the Jerusalem Marathon in March is a more challenging hilly route and attracts elite athletes and serious runners from around the world, as well as fundraising groups and those who enjoy taking in the historic scenery while they run.

This race is a little different from your usual city marathon. Everyone knows the story of the Ancient Greek Marathon, but in Israel we have the Bible Marathon, running in the footsteps of a biblical character who ran from the site of a battle with the Philistines near Rosh Ha’Ayin to Shiloh, where the Tabernacle was located. The modern day founder of the Maccabiah Games in Israel measured his route and found that it was 42 kilometers – exactly the same as the modern Marathon race. Every October, keen runners follow this challenging race route across Israel, enjoying a well-planned and historically themed event.

If you love running and want to plan your Israel tour around a Marathon, or include some scenic running time or other sports activities during your tour of Israel, talk to Shatour.