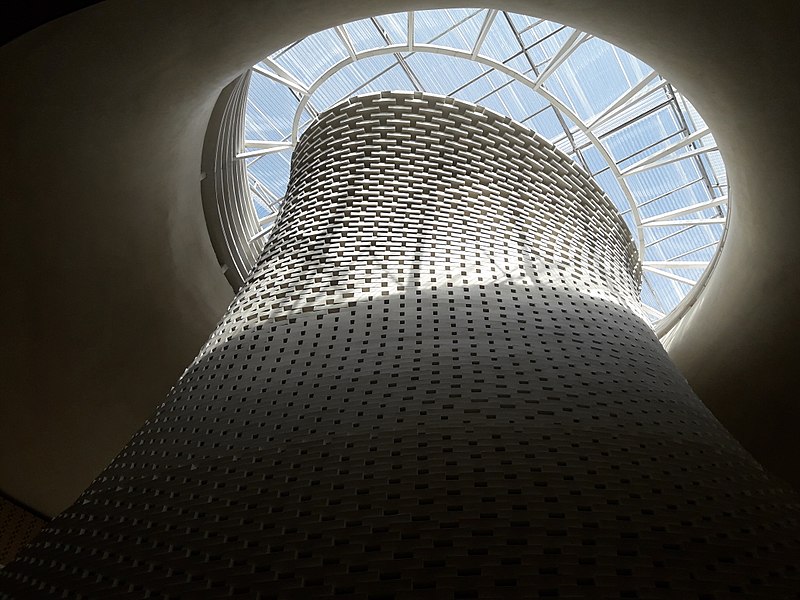 Opened in May 2017, the National Hall of Remembrance for Israel’s Fallen is a recent addition to the Mount Herzl National Military Cemetery and Visitor Center. Its stunning design cleverly includes memorials to the 23,000 soldiers who have been killed in Israel’s wars.

The National Hall of Remembrance was designed to resemble a torch. Its central column is made from a mountain of grey stone bricks rising some 18 meters to its peak, where an eternal flame burns constantly. Its exterior shell is in the shape of a bell constructed from 6,000 steel bricks. The walls are covered with individual bricks engraved with the names of fallen soldiers and the dates on which they were killed. It is located alongside the Mount Herzl Military Cemetery where many of these 23,000 soldiers are buried.

Set on a hill next to the Yad Vashem Memorial Museum, the Mount Herzl Cemetery is a beautiful and peaceful place to visit. At its center are the graves of some of Israel’s great leaders, including past prime ministers Levi Eshkol, Golda Meir, Yitzhak Shamir, Yitzhak and Leah Rabin, and Shimon Peres, together with Theodor Herzl and his family. Herzl, the founder of modern political Zionism after whom the mountain is named, died in Austria in 1904 but was reburied in the Jewish State that he envisioned in 1949. Alongside him are other Zionist leaders including Ze’ev Jabotinsky and many of Israel’s deceased Presidents.

Walking through the beautiful gardens is like taking a tour of modern Jewish history. There is a section dedicated to the graves of the Jewish underground fighters who were executed for their role in the establishment of the Jewish state, and memorials to Jewish soldiers in other armies who died during World War 2. There are separate sections dedicated to fallen fighters from Israel’s various wars, from 1948 until the present day. Most of Israel’s young brave soldiers who have died in action during the past 70 years are buried here, although many families have chosen to have their sons buried in regional military cemeteries that are closer to home. There is also a garden dedicated to the memory of soldiers who are officially Missing in Action, whose burial places are unknown, including the Tomb of the Unknown Soldier.

There is a separate memorial on Mount Herzl to the Victims of Acts of Terror against Israel, at a plaza in the National Civil Cemetery next to the tombs of Israel’s leaders. The line between war and terror is sometimes thin in Israel, so the memory of all of Israel’s fallen is honored together on Yom HaZikaron – Remembrance Day – on the day before Yom Ha’atzmaut. These dates usually fall in early May, although the exact dates change each year. On Yom HaZikaron it is traditional for bereaved families and the friends of fallen soldiers and terror victims to gather at cemeteries all over Israel, and particularly at Mount Herzl. High school students and soldiers from each IDF regiment also visit every one of Israel’s 52 cemeteries, to ensure that no grave goes unvisited on this day, placing small stones and flowers on each tombstone. Ceremonies are held on Mount Herzl and at the Western Wall, although attendance is limited to those who have suffered immediate losses.

The National Hall of Remembrance is just one of the striking war memorials that you can visit around Israel. Other notable memorials to fallen soldiers from individual military regiments can be found in Beer Sheva, near Mevasseret on the road to Jerusalem (Har El Junction), at the Golani Junction in the Galillee, and at the Latrun Tank Museum.

When visiting Israel, you may want to pay tribute to those who gave their lives for the establishment and continuing security of the Jewish State. You may have a family connection with someone who died in one of Israel’s wars.

Talk to Shatour Israel Experience about including a visit to one of Israel’s military cemeteries or memorials during your tour of Israel.