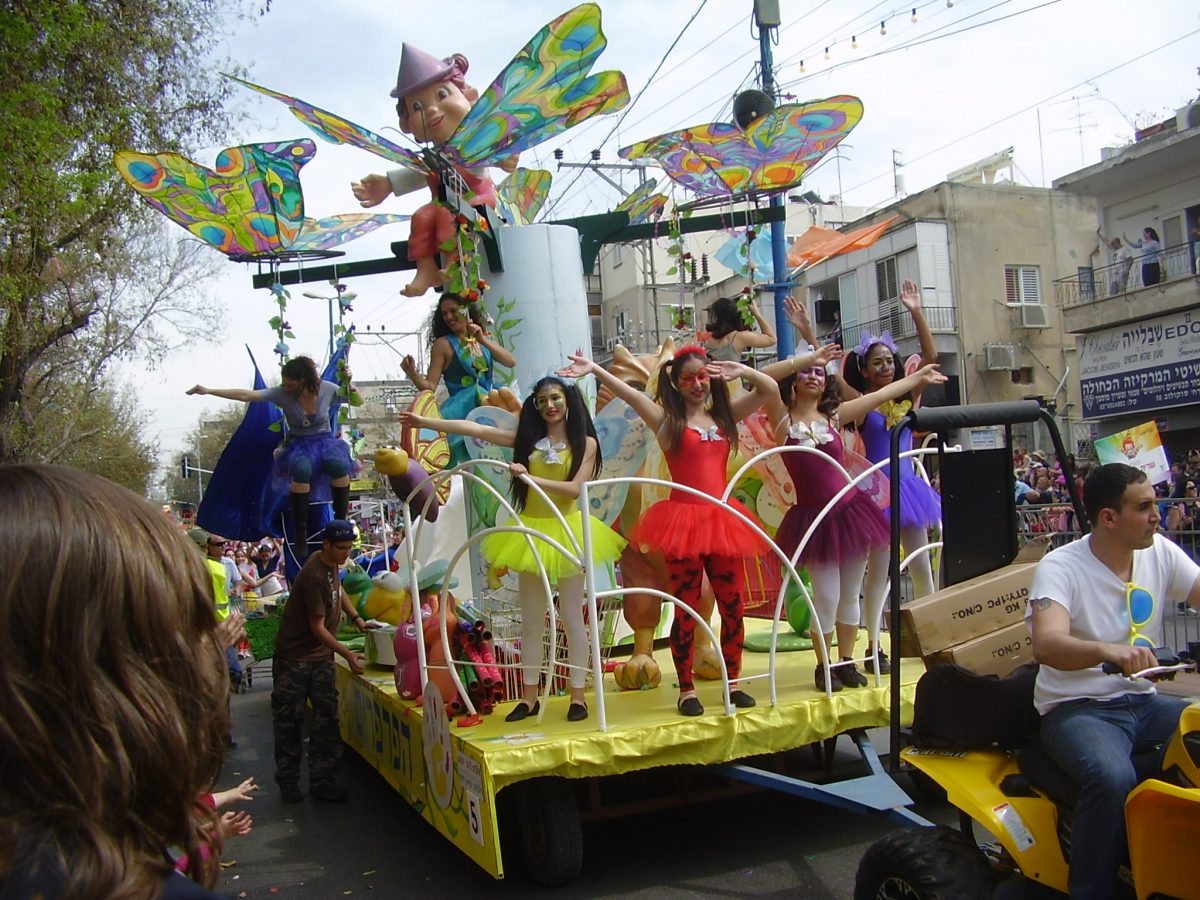 Just as Rio de Janeiro has its carnival and New Orleans its Mardi Gras, Tel Aviv has the Adloyada Purim Parade. Many other Israeli cities also have Adloyada Purim parades, but Tel Aviv is the capital of crazy carnival fun!

Adloyada is the name given to the festive Purim events that take place in the central streets of many Israeli cities. It derives from a description in the Talmud that on the festival of Purim people should get so drunk that they cannot tell the difference between the good and bad characters in the Purim story. The date of Purim varies from year to year, so the Adloyada parade may happen in February or March, and the weather is not always kind to the revelers, but they are never deterred.

The main feature of Adloyada is the costume parade. Dressing up in fancy costumes on Purim and on the days leading up to the festival is a very big deal in Israel. Children often have two costumes – one to wear for their school costume party and a second outfit for Purim and the Adloyada parade. Costumes are usually either classic – queens, soldiers, vampires and brides – or contemporary – unicorns and emojis are on-trend this year!

Tel Aviv is the party capital of Israel and the Adloyada parade here has a more adult twist, with young people wearing more daring costumes and partying in the streets. People travel from all over the world to dress up and participate. There are carnival floats, inflatables and troupes of dancers, music and thousands of people dancing in the center of town.

The Adloyada in Holon is probably the most elaborate carnival in Israel, with giant inflatables from around the world, acrobats, dancers, bands and orchestras, circus performers and street theater shows. Local organizations join in the action with elaborate group themed costumes. Here and in many other city Purim parades, children march together with their local youth groups, and teams of acrobats and local bands perform for the crowds that gather to line the main streets.

In Jerusalem, Purim is celebrated a day later than the rest of Israel and it is called Shushan Purim. On the day that is not Purim, there are events for children at many of the city’s museums, and dance parties at night in the city squares. Then, on Shushan Purim day, there is a costume party in Safra Square with live music performances, costume competitions, clown shows, giant puppets and street artists.

Purim is a time for showing off your creativity, your taste for drama and glamour, and dressing up as the person you would really love to be. Alcohol is consumed and celebrations can get quite noisy as the day progresses, but the mood is fun and the events are organized in a good spirit so that even young children can join in and feel safe.