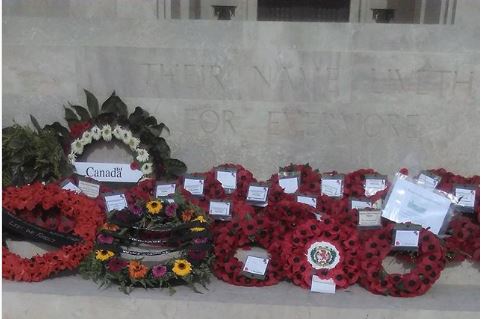 The First World War officially ended on November 11 1918, so this year marks the centenary of the ending of the Great War.

There are four military cemeteries in Israel where Allied and enemy soldiers are buried – in Jerusalem, Haifa, Beersheva and Ramle. Very few people today visit the graves of the fallen soldiers who died so far from home, but there are annual ceremonies to mark their sacrifice. The British Consulate runs ceremonies on or around November 11 at the Ramle and Jerusalem military cemeteries, and the Australian and New Zealand embassies organize ceremonies on April 25 (Anzac Day) and October 31 in Ramle, Jerusalem and Beersheva. The Allied Military Cemeteries are open to the public all year round.

The Mount Scopus military cemetery was established in 1927. 2,539 fallen soldiers are buried there, 24 of them Jewish. There is a Memorial Chapel with a carved list of the names of 3,366 soldiers who lost their lives in Egypt and in Palestine during World War 1 and whose graves are unknown. The cemetery overlooks the Old City and surrounding hills and this view is protected by laws preventing construction.

The Ramle cemetery is beautifully maintained with green lawns and red rose bushes between the graves. It commemorates 5,731 fallen soldiers from 57 different nations, among them 40 identified as Jewish. One of the grandsons of Baron Edmond de Rothschild is buried here, and the grave of a young British soldier called Harry Potter has become a landmark. He was killed a year and a half after his conscription during an attack near Hebron.

Beersheva was the site of a major battle between the Allied forces and the Ottoman Turkish Army on October 31, 1917. The Australian and New Zealand light horse brigade (known as the ANZAC Mounted Division) launched a daring attack on horseback and succeeded in capturing the city, marking a turning point in ending the Ottoman rule of Palestine.

The ANZAC Memorial Center is located near the Commonwealth War Graves Cemetery where 1,239 soldiers are buried, including 173 Australians and 31 New Zealanders. There is a bronze statue of an Australian horseman in the Park of the Australian Soldier, which is a memorial park and public playground with special facilities for disabled children.

The Haifa British War Cemetery contains 305 Commonwealth graves from the First World War, including 86 unidentified soldiers, and 36 graves from the Second World War. Haifa was the site of a major battle between the British Indian Cavalry and the Desert Mounted Corps against the Ottoman, German and Austrian armies on 23 September 1918. Haifa was captured by the Indian Mysore and Jodhpur Lancers and the Allied forces set up a hospital there.

Click here to watch the November 11 Ceremony at the British War Cemetery in Jerusalem, which takes place on the Saturday closest to Armistice Day.