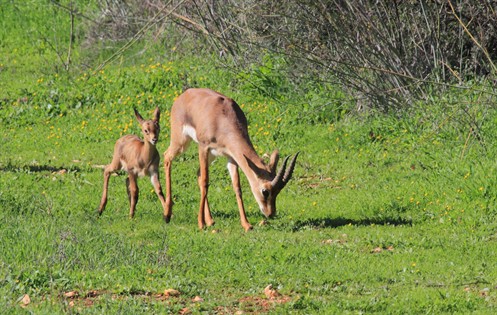 Nature conservancy has been a priority in Israel since the early years of the State and there are many magical places where you can see once endangered species flourishing.

Until World War I, Israel was home to a diverse menagerie of Asian, African and European species, due to its location at the crossroads of all three continents. The Bible describes many species that are no longer found in Israel today, such as bears and lions, crocodiles and hippopotami, but many other Biblical species can be seen, both in the Jerusalem Biblical Zoo and in nature reserves around the country.

Much of this is due to General Avraham Yoffe, a founder member of the Haganah and director of the new Israel Nature and Parks Authority (SPNI), who went to extraordinary lengths to acquire endangered species of deer and to breed them and prepare them for reintroduction into Israel’s national parks.

This work continues today at the Yotvata Hai-Bar Nature Reserve where many endangered species indigenous to the Negev and Aravah regions are being brought back from the brink of extinction: the Somali wild ass, Arabian oryx, ostrich, onager, sand cat, Dorcas gazelle, Griffon vulture, Arabian wolf and Arabian leopard. Visitors can tour the nature reserve to see the thriving herds of herbivores running wild, predators in their cages, and an indoor exhibition of nocturnal desert animals.

The Valley of the Gazelle is an urban nature reserve in the middle of Jerusalem that is home to a herd of beautiful gazelles. The park has been landscaped with walking trails and biking paths so that you can walk or cycle among these elegant indigenous creatures.

You can find one of the largest herds of alpacas and llamas in the world at the Alpaca Farm in Mitzpe Ramon. This is a working farm which produces and weaves alpaca wool, and children can also ride the tame alpacas and llamas. Also in the Negev Desert, the El HaYaen Ostrich Farm is open to visitors who want to interact with the largest bird on earth!

The Ramat Gan Safari Park near Tel Aviv offers an African safari park experience with 1,600 species housed in or roaming around its 250 acres of parkland. As part of their conservancy project they have successfully bred both African and Asian elephants, and they have impressive collections of monkeys, hippos and lions.

The Jerusalem Biblical Zoo is renowned for its conservation efforts such as breeding eagles and vultures for release into the wild. They have also bred elephants using in vitro fertilization technology, and they breed and export penguins to zoos around the world.

Once the Rabbi of the Jerusalem Biblical Zoo, Nathan Slifkin has spent many years researching Israel’s native species and collecting examples for his Biblical Museum of Natural History in Beit Shemesh. The Museum showcases those extinct animals that cannot be safely reintroduced, such as lions, bears and cheetahs! The large species are exhibited as taxidermy specimens, but visitors can interact with live exhibits of the smaller species, such as quails, and learn about the symbolism of animals in scripture and the natural history of Biblical Israel.

If you love animals as much as we do, talk to Shatour Israel about visiting some of these fantastic conservancy projects and animal farms on your next trip to Israel.